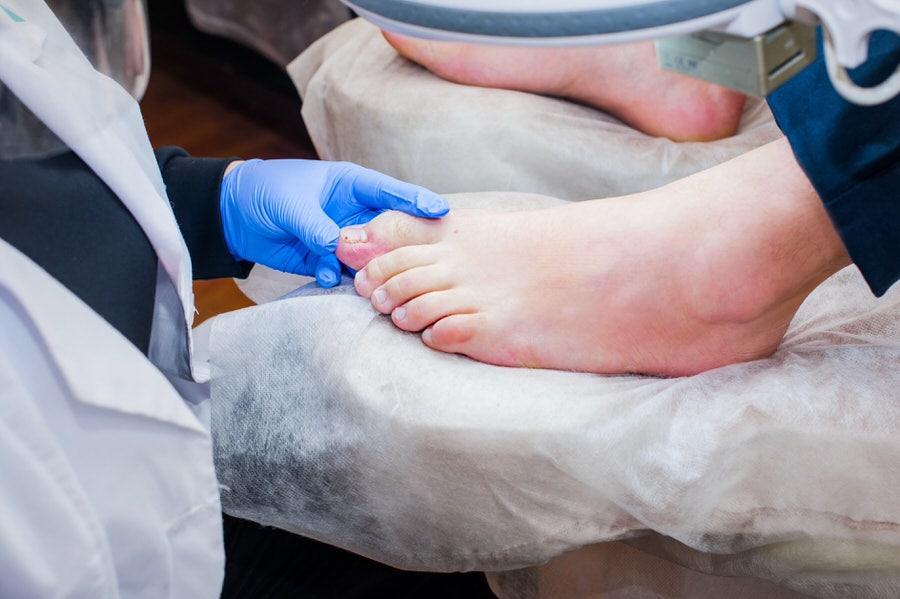 Toenails often serve as barometers of our health; the onset or presence of many systemic diseases can be spotted through the condition of the toenail.

For example, pitting of the toenails and increased nail thickness can be manifestations of psoriasis. Concavity—nails that are rounded inward instead of outward—can foretell iron deficiency, or anemia.

Some nail problems can be conservatively treated with topical or oral medications while others require partial or total removal of the nail. If you spot any discoloration or infection on or about the nail, you should schedule an appointment with us at Bay Area Foot Care to have it evaluated.

Ingrown nails, the most common nail impairment, are nails whose corners or sides dig painfully into the soft tissue of nail grooves, often leading to irritation, redness, and swelling. Usually, toenails grow straight out. Sometimes, however, one or both corners or sides curve and grow into the flesh. The big toe is usually the victim of this condition, but other toes can also become affected.

Ingrown toenails may be caused by:

If you suspect an infection due to an ingrown toenail, immerse the foot in a warm salt water soak or a basin of soapy water, and then apply an antiseptic and bandage the area. People with diabetes, peripheral vascular disease, or other circulatory disorders must avoid any form of self treatment and seek podiatric medical care as soon as possible.

Other “do-it-yourself” treatments, including any attempt to remove any part of an infected nail or the use of over-the-counter medications, should be avoided. Nail problems should be evaluated and treated by your podiatrist, who can diagnose the ailment, and then prescribe medication or another appropriate treatment.

A podiatrist will resect the ingrown portion of the nail and may prescribe a topical or oral medication to treat the infection. If ingrown nails are a chronic problem, your podiatrist can perform a procedure to permanently prevent ingrown nails. The corner of the nail that ingrows, along with the matrix or root of that piece of nail, are removed by use of a chemical, a laser, or by other methods.

Fungal infection of the nail, or onychomycosis, is often ignored because the infection can be present for years without causing any pain. The disease is characterized by a progressive change in a toenail’s quality and color, which is often ugly and embarrassing.

In reality, the condition is an infection underneath the surface of the nail caused by fungi. When the tiny organisms take hold, the nail often becomes darker in color and foul smelling. Debris may collect beneath the nail plate, white marks frequently appear on the nail plate, and the infection is capable of spreading to other toenails, the skin, or even the fingernails. If ignored, the infection can spread and possibly impair one’s ability to work or even walk. This happens because the resulting thicker nails are difficult to trim and make walking painful when wearing shoes. Onychomycosis can also be accompanied by a secondary bacterial or yeast infection in or about the nail plate.

Because it is difficult to avoid contact with microscopic organisms like fungi, the toenails are especially vulnerable around damp areas where people are likely to be walking barefoot, such as swimming pools, locker rooms, and showers. Injury to the nail bed may make it more susceptible to all types of infection, including fungal infection. Those who suffer from chronic diseases, such as diabetes, circulatory problems, or immune-deficiency conditions, are especially prone to fungal nails. Other contributing factors may be a history of athlete’s foot and excessive perspiration.