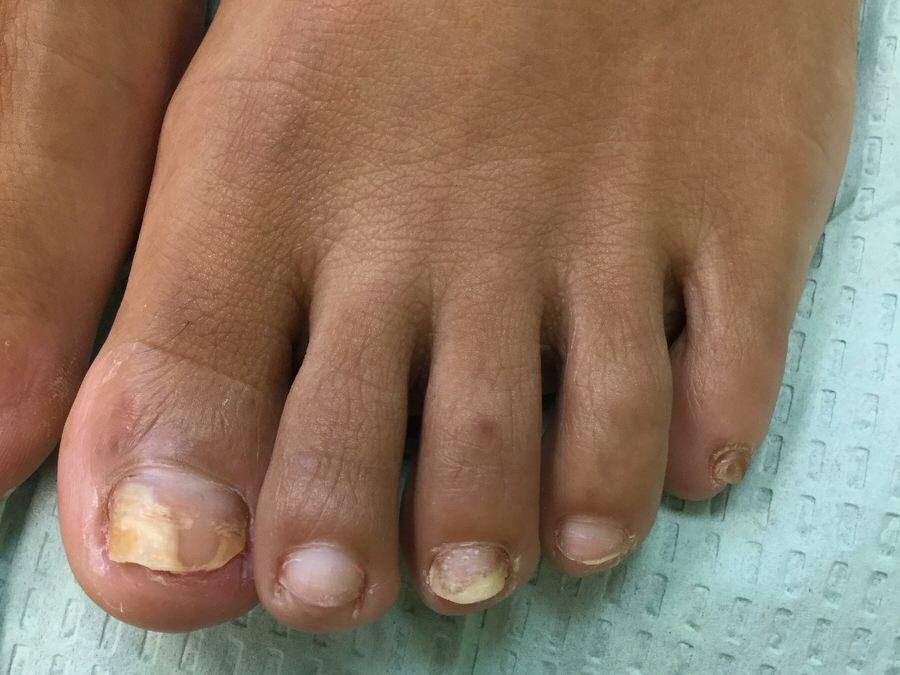 The Symptoms of Onychomycosis and Foot or Toenail Fungus

Onychomycosis is the medical term for toenail fungus infection. It is the most common toenail disorder and makes up nearly 50% of all toenail problems. This condition affects both toenails and fingernails; however, toenail infections are far more common. According to the American Academy of Dermatology, toenail fungus affects 12% of all Americans.

The symptoms of toenail fungus are the nail plate having a thickened, yellow, or cloudy appearance. The toenails may become rough, ragged, or brittle, and could possibly crumble or separate from the nail bed (onycholysis). When the infection is severe, nails can be distorted in shape or display a dark color caused by buildup of debris under the nail. However, unless the disease is particularly severe, pain is usually not a symptom of toenail fungus; the symptoms are noticeable in the appearance and smell of the toenails.

Fungal skin infections of your feet are more commonly referred to as athlete’s foot (tinea pedis). Athlete’s foot is contagious and can be passed on through direct contact in showers or locker rooms, areas of prolong periods of dampness where fungus tends to thrive. The most common symptom is cracked, flaky, peeling skin around the foot or between the toes, with or without associated itchiness and redness. Other symptoms may also include burning, blistering, oozing, or crusting. Treatment of associated skin fungus is often a preventive measure to avert future nail fungus reinfections.