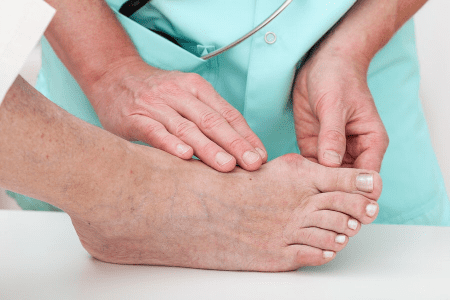 A bone spur is a calcium deposit that builds up along a bone into a bone-like growth. They appear because of continued stress or rubbing of a bone for a prolonged period of time. New bone forms in response to the stress or inflammation, the bone’s way of trying to stabilize or protect itself.

Generally, spurs in the foot are caused by strain to the muscle and ligaments of the foot, which makes them a common problem for athletes and workers who put their feet under frequent strain. They are also frequently associated with conditions like plantar faciitis and rheumatoid arthritis. Other causes include arthritis, foot injury, strain caused by overweightness, and poorly-fitted shoes. They take time to form, which means it can be tricky to catch them in the early stages.

Bone spurs are usually small, about a fourth of an inch (.6 cm) long, which can make them difficult to detect. They may cause pain, inflammation, and swelling in the foot, and the area might feel warm to the touch. Eventually, a small protrusion may become visible.

But, on the other hand, bone spurs may cause only a few symptoms or none at all, depending on how and where they appear. As many as half of people with bone spurs feel no pain from the growth. They are often discovered by accident when a podiatrist is examining the foot for other problems. But even if a bone spur causes no pain or discomfort, they can grow to cause difficulties over time.

If you are experiencing foot pain or have noticed any unusual bumps or protrusions, visit your podiatrist; don’t let the condition get worse. Your podiatrist may recommend any of various treatments, including exercise, custom orthotics, anti-inflammatory medication, and cortisone injections. If such treatments are ineffective, surgery might be required.